This month we are featuring an interview with Miranda Pennell, a London-based filmmaker, current recipient of an AHRC scholarship for practice-led doctoral research at the University of Westminster. We discuss two of her films, Why Colonnel Bunny Was Killed (2010) and a film currently in the making, which explores the interconnections between the Anglo-Iranian Oil Company archives and a collection of photographs taken by Pennell’s father while working for the same company.

Why Colonnel Bunny Was Killed will be screened at the Whitechapel Gallery on Thursday 30 January 2014, as part of Autobiography and the Archive, curated by Mnemoscape. Please notice that this is the first part of our interview and it aims at introducing and framing the discussion that will be further developed in part 2 (to be published next week).

AF: I would like to start by talking about your current research project and, in particular, about the film that you are working on at the moment. Could you briefly describe what this project entails?

MP: The material for this film is drawn from photographs from the archive of the Anglo-Iranian Oil Company (later named BP) in addition to a personal album that belonged to my parents. The film is framed as a story about a woman who wants to resolve a coincidence, a mystery about her late parents. She looks to her family’s past in Iran. The film asks questions about the British presence in Iran in the 20th century, up until the revolution. But I think it is also a reflection on looking, and what it means to look at an image and at another person.

AF: Your previous film, Why Colonel Bunny Was Killed, was based on the diary of one of your ancestors, a medical missionary on the Afghan borderlands. Your current work, instead, is based on your father’s photographic album from Iran. Can I ask you what relation did your father have with Iran?

MP: My father went to work for the Anglo-Iranian Oil Company as a young engineer, immediately after the war, in 1946. He travelled overland to South West Iran with my mother and worked all his life for the company, though not always in Iran. They were expelled, along with the rest of the British in 1951, when the popular and democratically elected Prime Minister Mossaddegh nationalised Iranian oil. Once Mossaddegh was overthrown by the Anglo-CIA coup d’éetat of 1953, the British returned, now with the Americans, although my parents didn’t return to live and work in the country until 1961. Like many other employees posted abroad, they were very affected by the memory of their experience of colonial cultural encounter, which always stayed with them.

AF: In Why Colonel Bunny was Killed and in your current work, you use colonizers’ archives (your relative’s diaries, the Anglo-Iranian Oil Company archives and your father archives of the time he spent in Iran). This goes to say that you have a personal relation to the colonizers. How do you personally place yourself in this? How does it impact and motivate what you do?

MP: The question of how I fit within this Imperial history is part of the film’s implicit drive, which I am negotiating as I work. Not only where I fit inside this story, but where the viewer fits. The film is still in progress, so this negotiation is on-going….

When I started, I had serious concerns about how I would use my no-longer-living parents’ image for my work. I felt so emotional when I looked at a few of the images. But my motivation is not to make some special revelation about my family. Rather, I am trying to act as a bridge and to do something that I want the viewer to do: we all come from somewhere and need to think about out how things connect. We all have some connection to a shared colonial past after all, by virtue of living with the after-effects of colonialism.

On another level, I simply want to make a film about something I am in a position to speak about. My interest is in bringing the colonial past closer to the viewer’s post-colonial present, so putting this huge narrative into relationship with a personal history seems like a potentially effective strategy which brings it closer. I am using my position inside the narrative that I am researching as a point of connection, thereby folding the research process, the filmmaking process and my own experience into the story I am telling.

AF: When I watched Why Colonel Bunny Was Killed I have really appreciated the way you have managed to keep the balance between narrative and images: you have developed a narrative, without completely spelling it out – you have managed to leave the space to the images to work by themselves. I think what really worked for me is that you skilfully avoided two pitfalls of archival (art)work, which amount to either being too narrative (telling a complete story, in a rather didactic way) or not telling enough about the material on view, therefore disabling the possibility of understanding or creating a connection with the viewer.

MP: Offering relatively small amounts of narrative information can successfully provoke curiosity, or illicit a desire to find out what lies behind an image, especially an archival image. The photographs do a lot of the work – they often suggest enigmas and questions, and I aim to playing on that narrative quality. This atmosphere of enigma is implicit to photographs, as well as to the experience of searching in an archive. So I am trying to translate that experience, and to reproduce it for the viewer so that they will want to look closely, to ask questions and make their own chain of associations.

If material is presented so that the reading remains completely open-ended, this doesn’t really give you much leverage if you want to make a viewer active and engaged – as I do – within single screen work. So I try to use language and montage to create some of the dynamic of a narrative drive, which I can later break apart or abandon in order to remind the viewer of the speculative nature of the project.

That said, there needs to be a question worth asking of the archive to begin with. Why Colonel Bunny Was Killed is based around a kind of red herring question about a photograph showing an open piece of ground in a landscape that is captioned “Where Col. Bunny Was Killed”. There is a serious question in there, somewhere, not only about the British counter-insurgency operations on the North West Frontier that echoes contemporary ones, but more fundamentally about the persistence of the discourse around faith, scientific rationality and violence.

AF: What obstacles have you found in the representation of colonial memory?

MP: Well, there is the context in which the colonial is regarded as a category of events that took place and impacted on people somewhere over ‘there’, that began and ended with direct rule, that is a finished and closed story from which we are separate. So I need to find representational strategies that enable me, or another viewer, to overcome distancing mechanisms, in order to attentively ‘read’ an image of the past. And then I have the practical problem of trying to work productively with an archive.

In the first place I have learnt that the task of surveying an institutional archive such at the AIOC, is impossible because of the sheer volume of material, and its particular disorganisation. The indexing and labelling of photographic materials in this archive is held together by a series of disparate logics, that makes a search seems random and governed by chance. But then, by what logic of pictorial value could photographs ever be ordered and catalogued? Finally, the evidence I would like to find is rarely there (as an example, documentation of physical labour in the narrative of the Anglo-Iranian Oil Company), or I simply cannot find it.

These paradoxes (and opportunities) come to define the challenge of searching the archive, which lies in the fact that my task entails finding strategies by which I can work meaningfully with such a partial selection of material. I find myself asking, “what do photographs show anyway? What can they tell?” 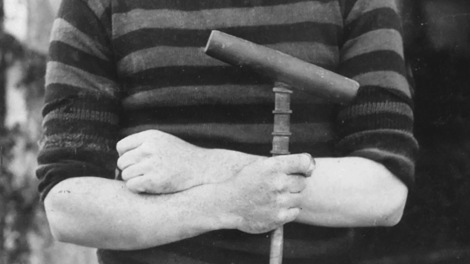 AF: I am now moving from your films, to ask you about the written component of your PhD research project. I am very interested in the idea of the ‘film as an archive’ that you are exploring. Could you tell me more about the way you are approaching this topic?

MP: I find it useful because the idea of film as an archive emphasizes some important aspects of film. It suggests film’s relationship to forging a future memory. And that a film is made from an arrangement of disparate materials, of data stored inside the film-strip and that the way it is organised might be provisional, contingent and fluid – that it could be otherwise. I think it is a helpful way of thinking about the possibilities of film, what it is and what it can do. Hollis Frampton has written brilliantly about film as an archive, as well as Thomas Elsaesser in a different context.

AF: Finally, a more general question: do you think that ideas of memory and remembering are necessarily bound to material objects?

MP: Sensations reproduce memories too. Sometimes I find myself making a gesture with my hand, and I remember that it is a gesture I used to see my mother make. Do you include the body and its gestures as a material object?

For more information about Why Colonnel Bunny Was Killed please click here to be redirected to the artist’s website.